Hawaiian Spinner Dolphins, thier antics are worth the trip but then you get to snorkel! 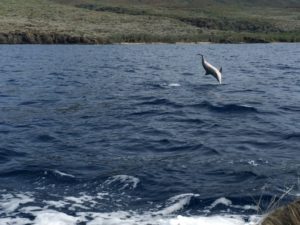 This is a small and slender dolphin, and the size of them will vary based on where they  live and they are white or light gray on the belly. They may have a very dark gray stripe that runs from the beak to the tail.

The average size for a Spinner Dolphin is from 6 to 7 feet in length. They can weigh from 130 to 170 pounds. The males are longer and heavier than the females.  The open areas of the tropical seas are where most of them are found. They tend to live further from land than most other species of dolphins.  They may be found in shallow waters to look for food from time to time.However In Maui, they have been seen closer to the coast than in any other regions.  The island of Lana'i is home to several large pods. We are often greeted by the spinners on our snorkeling tours to the island.

Spinning in the air is the behavior that this particular dolphin is well known for. They are also known to ride bow waves that are created by boats in the water. They can be found living in groups that range from 100 to more than 1,000. Within those larger pods, there are many smaller sub pods that can be complex to evaluate. There is a dominant hierarchy in place.

They are extremely social within their pods as well as with other species of dolphins. They have been seen using echolocation to find each other. They also touch frequently tend to create very close bonds.