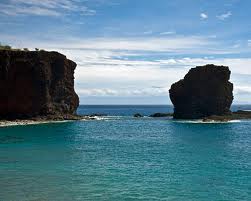 On the southern coast of Lanai is picturesque Hulopoe Bay and Lanai’s main boat harbor, Manele Bay. Rising from the sea just between these two bays is the iconic Puu Pehe, or Sweetheart Rock. Besides being a picturesque natural landmark, Puu Pehe is also steeped in Hawaiian legend.

Legend tells of two lovers, a Hawaiian maiden named Pehe from Lahaina and a young warrior from Lanai named Makakehau. He was so taken with her beauty that whenever he laid eyes upon her they would mist up in tears. Hence his name: Maka (eyes) Kehau (mist). He took her back to Lanai and hid her in a sea cave at the base of Manele’s cliffs.

One day while gathering supplies he noticed a storm brewing and started back, only to find Pehe drowned by the surge of the storm waves. Stricken with grief, Makakehau gathered his beloved in his arms. He wailed out to the gods and his ancestors to help him climb the steep rock island where he eventually buried her. He then jumped from this 80-foot summit into the pounding surf below.

Puu Pehe is situated about 150 feet offshore between Manele Bay and Hulopoe Bay along the island’s southern coastline. A closer look at this picturesque sea stack reveals, indeed, a tomb-like structure resting at the summit. Archeologists who have studied the rock will tell you that there are no human remains in this “tomb.” The tomb, in fact, may actually be a bird heiau constructed by the ancient Hawaiians, as numerous bones from sea birds have been found near the heiau.