Snorkeling the island of Lanai!

Humpback whale watching and snorkeling the island of Lanai are our specialties this time of year. Our snorkel trips pass through prime whale watch territory as we cross the channel between Maui and the island of Lanai.  Between the months of December and May we will stop and do a little whale watching and picture taking on our way across the channel. Our snorkeling trips are often greeted by numerous dolphins. There are spotted, spinner, and bottlenose dolphins that call the island of Lanai home. They can be very playful and love to ride in the wake from our rafts. We operate high speed eco rafts, which means we spend our time doing all the fun stuff and not just travelling.There are many spectacular snorkeling spots around the island of Lanai. One of the favorites is called Puu Pehe or Sweetheart Rock, a gorgeous spectacle, is the stuff that legends are made from, literally.   The legend tells of two lovers, Pehe, a Hawaiian maiden from Lahaina and Makakehau, a young warrior from Lanai who fell in love.  Makakehau brought Pehe to Lanai and hid her in the sea caves under Manele’s cliffs, only to discover one day that the sea had claimed her life. Makakehau, Maka (eyes) Kehau (mist) was so stricken with grief that he leaped  80 feet to his death.  Legend holds that his (misty) tears are the spray when the waves crash.

December is almost over, which means time is running out to lock in 2013 prices. If you are planning on snorkeling the island of Lanai in the future you can save a few bucks by booking your trip before the end of the year. If you book online at www.hawaiioceanrafting.com before January 1st, you will get the online discount plus the 2013 price. Same goes for whale watching trips, we offer 4 trips per day leaving from slip 8, in Lahaina harbor.

Snorkeling the island of Lanai! 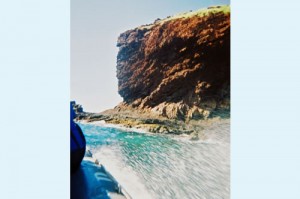