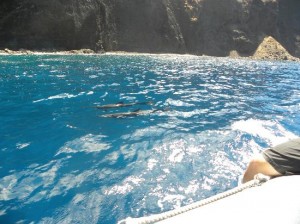 The following is a review that a guest left for us on trip advisor. They took our tour over to the island of Lanai and experienced some of the best snorkeling Maui has to offer. They took the time to write this very detailed account of their trip, it is a good read as well as informative.
“What an AMAZING experience!! Safe, GORGEOUS, and ECO!!”

Reviewed August 9, 2013 NEW
Short story: GREAT for kids, people scared of water, people on a budget, anyone interested in ecotourism, anyone who likes to see MIND BENDINGLY BEAUTIFUL things. Long story: Wow!! Ever have one of those experiences that just surprises you, but in a great way? That is what happened to us with Hawaii Ocean Rafting. The more we found out about them, the more we liked them. First of all, they produce what they promise: great service, GORGEOUS snorkeling along pristine reefs along the Lanai coast, all at a low cost. For us, we had the amazing experience of seeing TURTLES on both snorkeling outings, one on the first, and then THREE at one time on the second. Just because the snorkeling site is not called "Turtle Town" does not mean you won't see turtles. We went to "Fish Shack" and had so many around us, Sean, our guide, said, "When they choose to come this close to you, just pull your hands in and hang out." We had turtles within arm's reach. My kids (11, 9, and 6) were beside themselves with joy. We got to watch them sneak under rocks to rest. My non-swimming 75 year old in-laws also got in and snorkeled and had a great time seeing everything we did. GREAT GUIDING!!! It was marvelous. Beyond the very cool turtle encounters, the REEFS were unbelieveable. I've been along the Kona, Kauai, and Maui coasts dozens of times, but that reef along Lanai takes the cake. It was so fantastic, it's the first time I was actually glad that I wasn't scuba diving, as the reef was easily accessible by just diving down one body length... If I had a tank I would have spent the entire time avoiding the reef. Snorkeling was totally the way to go! We saw THOUSANDS OF DIFFERENT FISH, and Leanna (our captain) and Sean (our mate) spent lots of time identifying them for us, and finding cool stuff to check out. Between the snorkeling outings, Leanna took us out to a part of coast frequented by SPINNER DOLPHINS... Yup. The pod we saw had what seemed like fifty dolphins in it, but Sean assured us there were probably a lot more, as they are hard to count from the surface. Leanna even pointed out a baby that was probably about two days old, she said, as it still had wrinkles on its side from being in the womb. It was about as long as my forearm. SO CUTE!!!! They jumped and spun a lot, and swam on their backs with their pectoral fins in the air. It was amazing. But these are all experiences that you could possibly have with other charters. Here's what I loved most about Hawaiian Ocean Rafting: they practice what they preach. Their boat is not the fastest... for two reasons: FIRST, it is SUPER SAFE. Aluminum hull with military grade pontoons. That thing could handle anything!! I took the liberty of swimming the length of the bottom and looking under the hull to check it out, and it is clear that they take meticulous care of their stuff, and that safety is their top priority. No one on our tour got sea sick (some took Dramamine), the ride was really fun and really stable (but WINDY!! leave all your stuff on the pier. You won't need it. Bring towels and waterproof cameras). SECOND, their boat uses significantly less gas. You could go charging off at a million on a different charter, but that would use five times the gas, which would really seem hypocritical to be wasteful of fuel as you tour a fragile ECOLOGICAL PRESERVE. We went plenty fast as is, and had a great time with the wind blasting us. Faster would have just been painful. Sean and Leanna have an encyclopedic knowledge of the islands, the ocean, the reef and all of the current issues that are going on. Ask tons of questions, like what is Larry Ellison doing with Lanai, and why are there pine trees on the islands. I learned more on this day than a month of history, ecological conservation, biology, and political science classes. Truly impressive. The snacks were just fruit and veggies, with yummy pickles and ranch (that was a new one, but tasty!!). The drinks were fruit juices and soft drinks, but we really didn't need or want more. I was much happier paying a cheaper price and enjoying the islands and sea more. The rides went by too fast to really have time for anything else; it felt like most of the time we were in the water or watching dolphins. We will come back and go out with them EVERY TIME we come back to Maui. They are awesome.
Visited August 2013
Previous Next