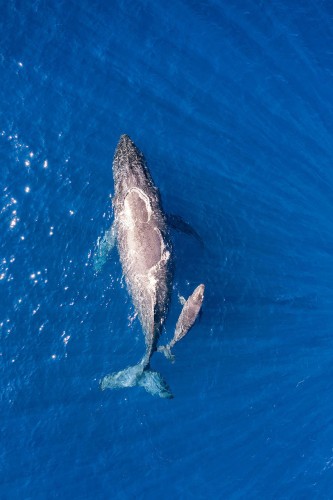 Climb aboard a private yacht for the all-day cruise of your dreams.

In my fantasy, I'm cavorting with a few friends on a private yacht in the Pacific. We linger in idyllic coves, survey the abundant marine life, hoist the sails, then charge into a dazzling sunset. And oh, how we feast! Ripe fruits, fresh fish, frothy beverages . . . you get the picture.

The planets must have been perfectly aligned over my head last week, because this dream came true.

For my thirty-fourth birthday, Mark and Jeri Robinson, owners of Island Star Excursions, hosted me and some friends aboard their Classic Columbia fifty-seven-foot sailing yacht. On the agenda: six hours of sailing, snorkeling, and relaxing like royalty.

I'm pinching myself as I walk up to the prettiest boat docked at Lahaina Harbor. TheIsland Star is a real beauty, decked out in fresh white paint and classy wood trim. Captain Bob Carlson welcomes me with a fragrant lei. Tim Bryan, today's first mate/cook/bartender, takes drink orders while my friends settle into shaded seats at the stern. Mark bids us adieu; he'll rejoin us for lunch in one of the company's seagoing rafts. Let the luxuriating begin!

As Island Star pulls from the dock, we're treated to a rare sight: a cocoa-colored Hawaiian monk seal basking on the breakwall. Fewer than 1,200 of these charmers exist in the wild, only 100 in the main Hawaiian Islands. I'm certain the sighting is an auspicious omen. The crew isn't so sure; there isn't a lick of breeze on the horizon. While we couldn't ask for better snorkeling weather, sailing is another matter. The sea is a windless plane of cobalt blue.

Captain Bob sweeps his hand towards Ka'anapali. "I remember when this was all empty beach. No hotels. Just a dirt road." A veteran sailor who has thoroughly explored the Pacific, he moved to Maui back in 1968. He's sailed with Island Star for over a decade.

Tim's resume includes stints researching wild dolphins in Mexico and assisting with captive dolphins on O'ahu - he far prefers observing the marine mammals in the wild.

He captains for Island Star Excursions, too, typically running Lana‘i tours aboard one of two seagoing rafts, or the Robinsons' newest vessel, the speedy Scarab.

On these smaller boats, passengers can scuba dive, explore underwater caves, and occasionally mingle with Hawaiian spinner dolphins. Just last week, says Tim, his guests swam with a pod for nearly two hours. "I finally had to pull myself out of the water," he gloats. "I have a tough job."

The accommodating sailors let our group have the run of the ship. We climb up on the boom, take turns at the helm, and make ourselves at home in the amply appointed cabins below deck.

Much of the yacht's custom woodwork, such as the handy seven-drink cup holder at the helm, is Captain Bob's handiwork. From the galley, Tim serves us crab bruschetta, shrimp cocktail, and a fruit plate overflowing with berries, kiwi, papaya, and pineapple. I experience déja-vu - am I daydreaming?

I dangle my feet over the bow as we cruise past Napili, mesmerized by the aquamarine sea coursing below. "That's my favorite color," I tell Nina Lee, our designated photographer. She nods. Everything is so beautiful, so brilliant, it's hard to absorb it all at once.

As Kapalua's jagged coastline comes into view, Tim tells us to watch for dolphins. No sooner have the words left his lips, than we spot two grey fins gliding through the water ahead of us. Soon, they're racing off our bow.

"For every one you see at the surface," says Tim, "there's at least five below." Tim tells us that Hawaiian spinner dolphins are nocturnal; they hunt at night and rest during the day.

We're witnessing a dolphin version of sleepwalking. The two at our bow are guards, tasked with patrolling the snoozing pod. Occasionally, one in the distance leaps from the water and spins - the acrobatic behavior for which the species is named.

The dolphins swim off as Island Star enters Honolua Bay, one of Hawai‘i's best snorkel sites. During northwest swells, it's a celebrated surf spot.

Today, it's invitingly serene. Huge coral colonies and silvery fish glitter just below the surface. The water is a transparent turquoise. "Now that's really my favorite color," I confess to Nina.

As Tim passes out masks and fins, Mark arrives in Man O' War , a sturdy inflatable raft. "C'mon over," he says, tossing his bowline up. "We'll go back out to those dolphins. It's a chance of a lifetime."

We jump ship in a hurry. Aboard Man O' War , we jet off for the mouth of the bay. Mark spots the guard dolphins and motors far out ahead of them. He cuts the engine, letting the dolphins approach us. "Slip quietly into the water, without making a splash," he advises.

Andrea, who's visiting from Canada, grins so wide she can hardly strap on her mask. This may be just another day at the office for the Island Star crew, but for us it's a rare, heart-stopping opportunity.

Beneath the surface, the dolphins' grey bodies undulate against an infinite blue backdrop. They pass below me in groups of six or twenty - too many to count. Youngsters are tucked in the center.

The dolphins swim in unison, periodically surfacing to breathe. Some rub their white bellies together - dolphin foreplay. I hear their soft, high-pitched notes.

Back aboard Island Star, we're all giddy from our wildlife encounter. Wendy tells us one dolphin nosed right up to her eleven-year-old daughter, close enough for Tessa to touch it. (She didn't.)

We practice swan dives from the bow and snorkel for a bit, working up a fierce hunger. Luckily, Tim's got us covered. We find an impressive spread of ‘ahi steaks, burgers, pasta, and Caesar salad waiting in the galley.

Over lunch, Mark tells us that actor George Hamilton chartered Island Starfor a week. His family sailed from island to island, anchoring in private bays at night. Island Star Excursions has permits to dock at any harbor in Hawai‘i, a boon few other companies can boast of.

"We're able to do whatever the client desires," says Mark. Oprah, Brittany Spears, Neil Armstrong, and the Princess of Monaco number among the many celebrities Island Star has entertained.

Built in 1969, the trim yacht has an extra-thick fiberglass hull. She's sturdier than a racing yacht, made for ocean crossings. Her crew is also built for adventure--Mark and Tim describe dozens of rescues they've participated in during Kona storms.

One infamous storm barreled through Lahaina Harbor at seventy knots, tearing boats free of their moorings and sending scores towards the reef. The Island Star crew helped corral the boats in distress. "We still have reunions from that storm," says Mark.

As the sun wanes, the winds begin to rise - fortune is with us! Mark returns to his raft, and Island Star weighs anchor. Captain Bob orders the sails set. Stephan and I help hoist the main.

Soon we're heeled over in the wind, launching across the late-afternoon swells. Man O' War appears portside, and Mark inquires whether Nina would like to photograph Island Star from the raft? Her eyes widen. Absolutely! "He always makes us do things like this!" groans Tim.

"It's a good life," says Mark, as we disembark back at the harbor. "I can't think of much I'd rather do." Amongst our group, the feeling is unanimous.

If this story has inspired your raw envy (as it did my editor's), let this ease your jealousy: while snorkeling, I was peppered with small jellyfish stings. Days later, I'm itching the scabs fondly - a small price to pay for a dream come true.