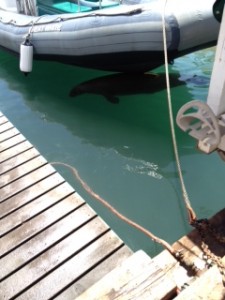 This Hawaiian monk seal was a surprise visitor below our raft inside Lahaina harbor.  These guys are considered an endangered species, with only about 1.100 remaining. They are a species of earless seal that only live only around the Hawaiian islands. They have evolved for the past 15 million years in the relative absence of predators, this means that they never developed the "fight or flight" instinct. These seals are a very old species that scientists believe have changed very little over thousands of years. These guys behave in a very tame and curious manner which has made them very easy to trap. They were killed for their oil and pelts in the 19th century, and remain threatened by human encroachment, low genetic variability, entanglement in fishing nets and marine debris. We see a lot of dolphins and turtles on our snorkeling trips but this seal sighting is not very common. Hawaiian monk seals are naturally solitary animals and a sighting is pretty rare. So if like on this day, you find a monk seal under you raft, the boat does not move. Hawaiian monk seals are sometimes encountered sunbathing on the beaches of Maui and Lanai, make sure to keep your distance both on land and in the water.