The humpback whales of Maui may be the largest group of North Pacific humpbacks in the world. 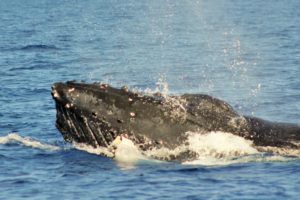 Without a doubt, one of the most amazing marine wildlife adventures you’ll ever have the opportunity to partake in is a chance to witness the majesty of the North Pacific Humpback Whales in their natural environment. Year, after year, these magical mammals grace Hawaiian waters and shorelines for their annual Winter migration through the North Pacific Ocean (roughly November-May).First, it’s important to know that there are in fact 3 separate populations of the North Pacific Humpback Whale. These populations are scientifically referred to as “stocks.” The California/Oregon/Washington stock migrates from British Columbia to Central America. The Western North Pacific stock migrates from the Alaskan Kodiak Archipelago to Japan waters. Finally, Hawaii’s Kohola (whales in the ancient Hawaiian language), also known as the Central North Pacific stock, migrate between Alaska and the Hawaiian Islands.

The exact number of Humpback whales that visit Hawaii every year is unknown, but marine biologists have speculated that an even number of whales make up each stock. Some speculate that 1/3 of the total population of North Pacific Humpback Whales arrive in Hawaii every year, others stating that it could be 1/2 of the total population. But, it is also a fact that the majority of Humpback calves born each year are also born in Hawaii. With all of that information in mind, biologists overall believe that concerning stock populations migrational locations, Humpback Whale presence in Hawaii is the largest. Although each stock is distinct in migration habits, there is an intermixing of stocks, which happens in Alaskan waters during the Summer months.