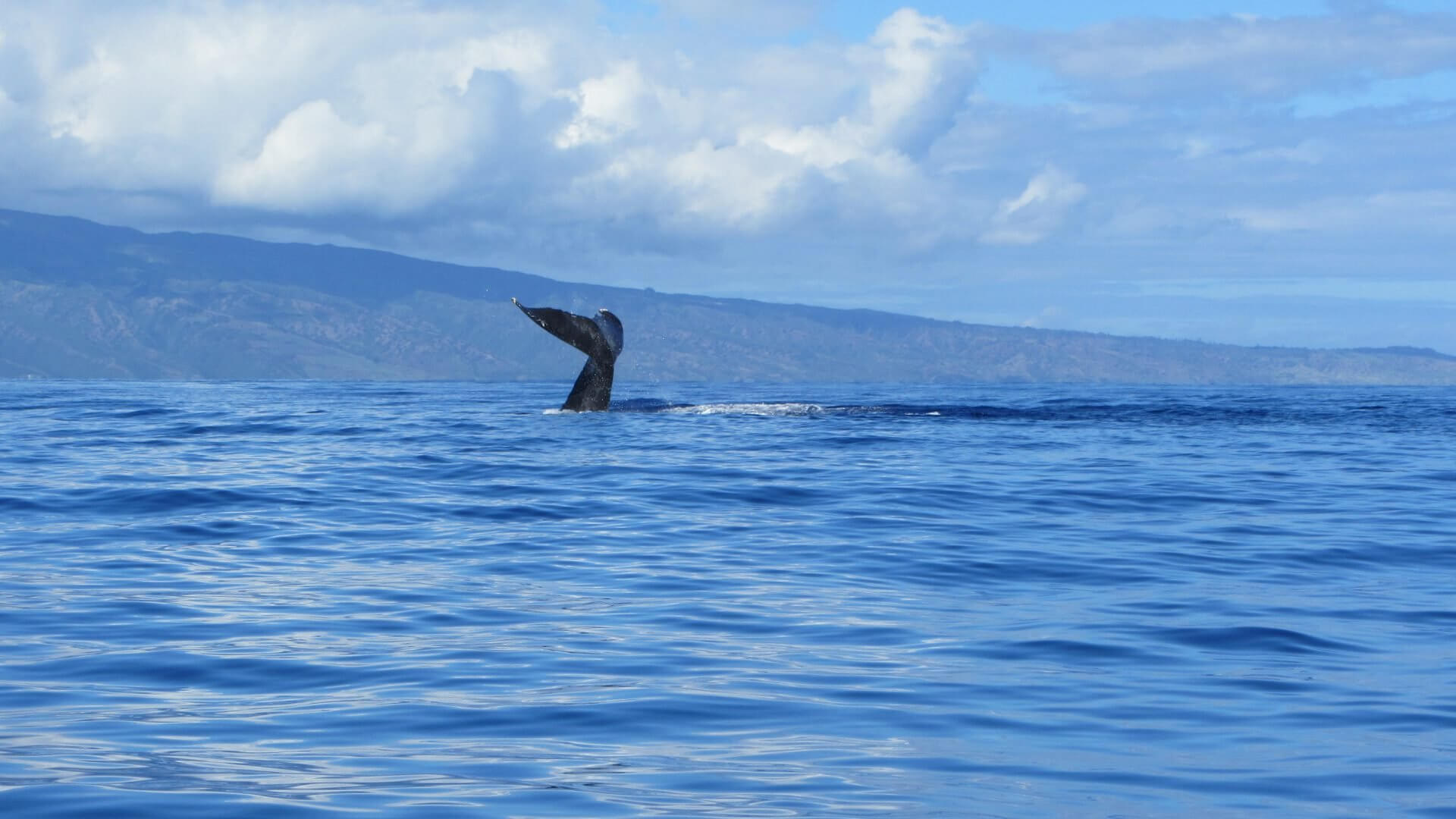 Facts About Humpback Whales in Maui 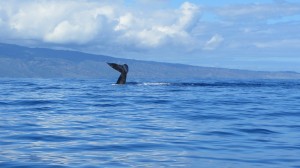 Maui's humpbacks remain quite mysterious, but here are a few things that we do know.

The humpback whale is a baleen whale and a rorqual whale that sings amazing songs.  It performs complex and cooperative feeding techniques.  The humpback has a bulky head with bumpy protuberances (tubercles), each with a bristle.  Humpbacks are acrobats of the ocean, breaching and slapping the water.  They live in pods and have 2 blowholes.  The name humpback describes the motion it makes as it arches its back out of the water in preparation for a dive.
about as much as three average adult human beings.
Humpbacks come in 4 different color schemes, ranging from white to gray to black to mottled.  There are distinctive patches of white on underside of the flukes (tail).  These markings are unique to each individual whale, like a fingerprint.  The humpback's skin is frequently scarred and may have patches covered with barnacles.
Humpback whales have 14-35 throat grooves that run from the chin to the navel.  These grooves allow their throat to expand during the huge intake of water during filter feeding.  They have small, round bumps on the front of the head (called knobs or tubercles), edging the jaws.
Humpbacks have huge, mottled white flippers with rough edges that are up to one-third of its body length; these are the largest flippers of any whale.  The humpback's genus, Megaptera, means "huge-wings," referring to its flippers.  The flippers may have barnacles growing on them.
The deeply-notched flukes (tail) are up to 12 feet (3.7 m) wide.  Humpbacks have a small dorsal fin toward the flukes.
2500 kg) of plankton, krill and small, schooling fish each day during the feeding season in cold waters (about 120 days).  They eat twice a day.
Humpbacks cooperate in hunting and have developed a method of rounding up highly concentrated masses of prey that is called bubble-net feeding.  The hunting members of a pod form a circle 10-100 feet (3.1-31 m) across and about 50 feet (15 m) under the water.  Then the humpbacks blow a wall of bubbles as they swim to the surface in a spiral path.  The cylindrical wall of bubbles makes the trapped krill, plankton, and/or small fish move to the surface of the water in a giant, concentrated mass.  The humpbacks then eat a large, hearty meal.
The humpback whale has about 330 pairs of dark gray baleen plates with coarse gray bristles hanging from the jaws.  They are about 25 inches (0.6 m) long and 13.5 inches (34 cm) wide.

Humpbacks travel in large, loose groups.  Most associations between humpbacks are temporary, lasting at most a few days. The exception is the strong and lasting bond between mother and calves.
Humpback whales can dive for up to 30 minutes, but usually last only up to 15 minutes.  Humpbacks can dive to a depth of 500-700 feet (150-210 m).
Humpbacks are very acrobatic, often breaching high out of the water and then slapping the water as they come back down.  Sometimes they twirl around while breaching.   Breaching may be purely for play or may be used to loosen skin parasites or have some social meaning.
Spyhopping is another humpback activity in which the whale pokes its head out of the water for up to 30 seconds to take a look around.   Humpbacks also stick their tail out of the water into the air, swing it around, and then slap it on the water's surface; this is called lobtailing. It makes a very loud sound.  The meaning or purpose of lobtailing is unknown, but may be done as a warning to the rest of the pod.  Humpbacks lobtail more when the seas are rough and stormy.  Slapping a fin against the surface of the water is another unexplained humpback activity. 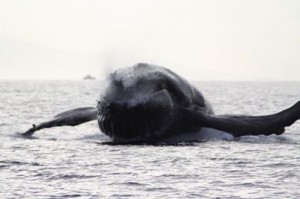 Humpback whales breathe air at the surface of the water through 2 blowholes located near the top of the head. They spout (breathe) about 1-2 times per minute at rest, and 4-8 times per minutes after a deep dive.  Their blow is a double stream of spray that rises 10-13 feet (3.1-4 m) above the surface of the water.     Humpback whales normally swim 3-9 mph (4.8-14 kph), but can go up to 15-16.5 mph (24-26.5 kph) in bursts when in danger.  Feeding speeds are slower, about 1.2-3.5 mph.
Humpback whales are the noisiest and most imaginative whales when it comes to songs.  They have long, varied, complex, eerie, and beautiful songs that include recognizable sequences of squeaks, grunts, and other sounds. The songs have the largest range of frequencies used by whales, ranging from 20-9,000 Hertz.  Only males have been recorded singing.  They sing the complex songs only in warm waters, perhaps used for mating purposes.  In cold waters, they make rougher sounds, scrapes and groans, perhaps used for locating large masses of krill (the tiny crustaceans that they eat).
Humpback whales live at the surface of the ocean, both in the open ocean and shallow coastline waters.  When not migrating, they prefer shallow waters.  They migrate from warm tropical waters where they breed and calve to arctic waters where they eat.